As I progressed through the first part of my social media study (roughly a two month time period), my high level posting plan expanded to include a lot of the original planned items.  This article will expand upon the plan and include the actual activities which I took along the way.  Take a look at the visual  recap of my Social Media Diet Plan. 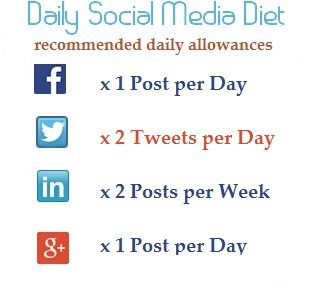 I found there are a couple to styles of posting which were required to be part of the conversation.  The first are those Tweets which require original thought on my part and the second are those Tweets which beg for interaction based upon what others are currently saying.   In future articles, I will be delving into deeper questions about what an increased/increasing social media following can do for an individual who is self-employed and business owners in general. Specifically, will this Twitter activity generate any revenue or contribute significantly to revenue gains.     I wanted to elaborate a little more about what specific actions I took along the way as the devil is always in the details.  And rate myself to see how well I did with these tasks.  Below is a very unscientific gut feeling rating which I assigned myself for each social activity.  The posting activities can be broken down into two categories:  Those which require original thought and those which require interaction with current Tweets.

As I moved forward and gained a lot more followers; the noise on Twitter made it really difficult for me to find the tweets of the influencers and followers whose messages I wanted to see.  This led to my beginning to use  lists. Sample Lists which I created for myself

I added some public and private lists and proceeded to categorize my followers or those whom I followed into categories.  Lists can be private or public which was very helpful when I found followers who I considered prospects; I could place them in a list which would only be known by me.   There are number of public lists on Twitter which other Twitter users can subscribe to as well.  This might take some of the legwork out of creating a list from scratch it you want to follow a popular topic; the list might already exist. 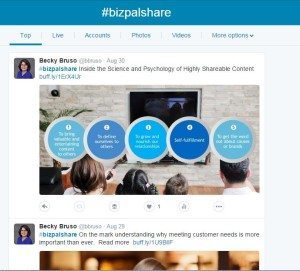 As I built a collection of posts, I began to encounter some really great stories about what folks were doing in this space which were entirely related to my posting focus and I wanted to share these. I was posting quotes, original articles, and just sharing some information I found really awesome.   I also wanted a way to be able to go back later on and see these different categories.  Some key similarities about the types of content I was posting emerged.  This led to my defining some  hashtags  for my content.   I setup these hashtags to distinguish between what was my original content and what I had garnered from others.  First, I checked to see if the hashtags I wanted to use were used elsewhere. This led to  the following hashtags.

Benefits of Hastags and Lists

I now could take different deep dive views into my Twitter followers and my own tweets.  This categorization with the use of both lists and hastags, allowed me to go back into Twitter and look at the Tweets from myself and others for different perspectives on the content.  Most importantly, I could do this anytime on my schedule and not have to worry about scrolling through the noise.  The lists also allow me to view multiple profiles under one list category.

Along the way, I gained some insight into Twitter and what sorts of content gets shared more often.  I also learned that there is a lot of noise out there and found a way to get the best information while limiting the noise by using lists.   During the first part of the study, I encountered a couple of personal crisis which involved my being out of the USA for longer than my planned 9 day vacation.  I really felt that I fell short on providing my own original content as my intention at the start of my study and pre-vacation Summer Crisis One was to be actively contributing a new originally authored article by me each week in the study period.  Reality and plans don’t always jive such that in the period of  May 31st to July 31st, I was only able to produce 1 original article.   This was a pain point for me personally; however, I plan to compensate for this in the future by ensuring that I have enough content in the wings. This is a necessary part of my plan as things can always arise which will take us off course.  Lesson Learned:  Best to always be prepared with posts written in advance.
Get Early Study Results!
For Email Newsletters you can trust.